Good work by the Walker Brothers at the weekend. 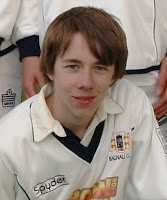 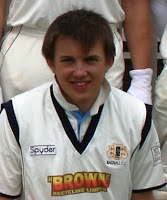 Jack Walker playing for Bagnall CC against Church Eaton, in only his second innings of the season due to a broken and bone-grafted wrist, scored 46 not out. This, despite an early crack on said wrist, temporary retirement and innings resumption. 8 outta 10 for resumption - 2 marks deducted for blarting.

Meanwhile, George Walker, not wishing to be out-done, banged a creditable 19 not out for Bagnall CC under-17's against the mighty Porthill Park. I should say that The Dijit hasn't until now taken batting awfully seriously, indeed, either getting a run, or not getting out first ball is perceived by him as a roaring success. And taking to the crease without bothering to take a guard and with his usual twisted smirk that says 'I won't be here long' merely indicates his disdain for wielding the willow. So 19 not out in 16 overs against a top team in the age-group above must be seen as positively schizophrenic (if there is such a condition).

Back to the Jack version who had the insolence to go into bat in his second match of the weekend against another top team - Leycett CC in the Talbot Shield quarter final - before I had arrived back from the Porthill game. Not impressed. And even less impressed that he'd got out for 5 - not in the script. However, redemption was achieved when he took the last 2 wickets of the Leycett innings, winning the match to send Bagnall through to the semis.

Not wishing for elder brother to have the last word, George took to the field against Norton CC under-15's on Monday evening (Monday's the new Sunday), knocked 12 runs, got a wicket (Norton's captain) for 8 off 3, and took a catch. See ! 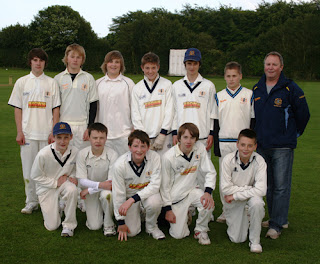